How science denial is turning the GOP into the world's pariah

If you think Donald Trump leading the GOP primary race is the worst thing happening in American politics at this point, you’re wrong. There is something much broader, more subversive, and much more damaging to our country that is being left unchecked by the mass media.


On September, 16th, CNN hosted a marathon 3-hour Republican primary debate that broke records for viewership primarily for the reality-show-appeal of Trump’s campaign pugilism. What stuck out to me, and what should have made the headlines, were the two medical doctors that stood on a stage in front of 23 million people and denied the very science they’ve dedicated their professional lives to.


Maybe we can accept people like Trump, Christie, and Huckabee denying science and obfuscating national realities for their own personal agenda. But, as a nation (as an advanced nation!) we should not give this irrational leeway for Rand Paul and Ben Carson to pander to the anti-science/anti-intellectual crowd that forms the GOP primary base. 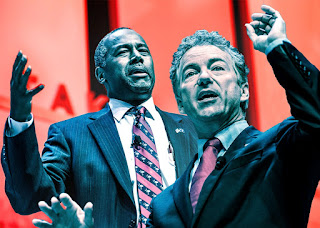 Both Paul and Carson have had extremely successful careers as surgeons for the tenderest of organs, eyes and brain respectively. Surgical career success such as theirs does not happen if someone is sloppy or careless, either physically or mentally. It happens by someone immersing themselves into the scientific world of medicine and trusting the process and evidence presented to them. These are affluent men of science, yet they have the audacity to stand on stage in front of millions and try to convince us they “aren’t sure” about climate change, or if vaccines cause autism? A belief in conservative/libertarian models of economics and social constructs is one thing, but denying the processes of your life’s work for primary votes exposes both your dishonesty, and your willingness to pander for votes at any cost.


If we dig deeper to understand why, we’ll find that the GOP is the only conservative party in the advanced democratic world to continuously deny the realities of modern climate science. The only one.


“A new paper by Sondre Båtstrand studies the climate-change positions of electoral manifestos for the conservative parties in nine democracies, and finds the GOP truly stands apart,” writes Jonathan Chait for New York Magazine. “Opposition to any mitigation of greenhouse-gas emissions, he finds, ‘is only the case with the U.S. Republican Party, and hence not representative of conservative parties as a party family.’ For instance, the Swedish conservative party ‘stresses the necessity of international cooperation and binding treaties to reduce greenhouse-gas emissions, with the European Union and emissions trading as essentials.’”


You’ll find that throughout the world of democratic nations, conservatism lives up to its name within their ecological sphere of influence.


Chait continues, “Germany’s conservative platform declares, ‘[C]limate change threatens the very foundations of our existence and the chances of development of the next generations.’ Canada’s, writes Båtstrand, ‘presents both past and future measures on climate change. The past measures are regulations on electricity production, research and development on clean energy (including carbon capture and storage), and international cooperation and agreements including support for adaptation in developing countries.’ Even coal-rich Australia has a conservative party that endorses action to limit climate change.”


There will always be conservatives and progressives. In fact, our country was setup to both function and thrive on these opposing pressures. But the right-wing extremism pervading our current political reality is forcing us outside the realm of a functioning, world-class democracy. Donald Trump may be a symptom, but the anti-science extremism that has infected even the smartest is, ultimately, the sickness.

Stephen Colbert's debut for The Late Show wasn't perfect, but it was great! 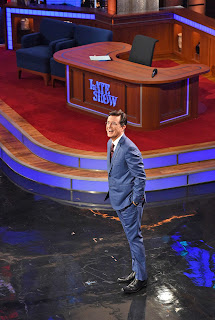 If you want to understand someone’s personality, you could do worse than ask who their favorite late night TV host is. The landscape of late night talk shows has always been a better reflection of America than anything else on TV. In very recent memory, the conservative Leno was balanced by Letterman’s subversiveness, and Conan came to be our quirky wild-child. Then came Jon Stewart’s brand that allowed us to be both entertained and also engaged with meaningful, spot-on commentary of real-world events as they unfolded. Stewart’s brand of comedy and the Colbert spin-off eventually became a personality litmus test for people, much like asking “Letterman or Leno?” Stewart was substance with comedy as the rich dessert, Colbert was comedy with substance as the rich dessert.

Last night, Stephen Colbert introduced himself to the country for the first time...or maybe it was the second time: therein lies the ultimate question we’ve been waiting 9 months to answer. There’s the Stephen Colbert that we all know, a character so deep and complex in his conservative simplicity that we never got tired of the schtick even after 10 years, and then there’s the Stephen Colbert that we barely know--a kid that grew up in a very large, Catholic family in SC, loved his mother dearly, and got the Daily Show gig early in his career and hasn’t looked back. Can the Stephen we barely know carry The Late Show? A show that exists because of the sheer force of an entertainment legend, David Letterman. And, can the Stephen we barely know compete with a soon-to-be entertainment legend, Jimmy Fallon?

But ultimately the real question became can the Stephen we barely know exist beyond the Stephen we know so well? In other words, can he operate without the comfortable mask of his character?

The debut of The Late Show with Stephen Colbert last night wasn’t perfect, but it was much better than good and I’ll dare say it was great. He showed us that he has the chops to stand up to the Letterman legacy and also to compete with Fallon. But most importantly, he showed us that we’ve been watching the real Stephen Colbert this entire time and didn’t know it. All those years of watching what we thought was a carefully crafted character turned out to be a joke on us, the audience. The conservative, blowhard, “Bill O’Reilly” riffing was just that, riffing. But they were riffs delivered through a real, compassionate, and smart human being--the real Stephen Colbert. Otherwise, the character would have become a pale, stiff caricature of itself and wouldn’t have lasted for 10 years and won 8 Emmys. Last night was our “a-ha!” moment when we could finally see The Colbert Report for what it truly was--a great man and a great entertainer gently distilling the worst parts of conservatism for our comedic pleasure.

Not since Johnny Carson has late night talk been able to cruise each week. Today’s multi-media landscape demands instant entertainment delight minute-by-minute, and Jimmy Fallon, with his creative carnival-like contests, has all but mastered this. I’ve spent this summer wondering how I would compete with him if I were Colbert, which is obviously a losing proposition. You can’t out-Fallon Fallon. But, where Fallon has taken the approach to stay clear of current and political events, other than a few monologue one-liners, Colbert showed us last night that he’s going to embrace our crazy political world. In one of the funnier bits last night, Colbert took on the comedic goldmine of Donald Trump and did not appear to soften the blows for network television, and boy did that feel good. In the absence of The Daily Show and The Colbert Report we desperately need someone to step up and take a stand against the absurdities being passed to us for political consumption, and last night Colbert showed us that he’s still on our side. 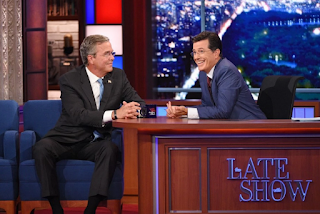 The choosing of Jeb Bush for the debut show drove home the fact that this show will tackle the current American reality head on. In between clever impromptu jokes, Colbert talked to Jeb Bush about his campaign, about the reality of the Bush Dynasty, about education, and about the systematic failure of partisan politics. It was a good interview that walked a fine balance of substance and joking around--the vibe of two smart guys having a beer in the backyard. Cloony’s interview was not one of the stronger parts of the night, but it did foreshadow the use of creative pre-filmed bits that will spice up interviews.
The show ended with a blow-out musical jam featuring Mavis Staples, Derek Trucks, Susan Tedeschi, Buddy Guy, Paul Janeway (St. Paul and the Broken Bones), Brittany Howard (Alabama Shakes), Ben Folds, and the great band of New Orleans' Jon Batiste--all taking part in the classic song "Everyday People." You can watch it here: http://video.vulture.com/video/Late-Show-Musical-Performance

Overall, I don't think he could have had a better debut show. Colbert gave respect where he needed to, placed jokes where he needed to, and the populist vibe throughout the show was driven home with the funky big-band jam at the end. American television is dripping with talent at this particular point and Stephen Colbert just showed us that he's ready to take the step up to become one of the greats.
--Brian Paul Swenk