The Life of David Bowie: A Rebel's Rebel

Of all the tributes appearing about David Bowie, no other will extract the essence of rock-and-roll for the disaffected and oppressed more than Mazlar Bahari has here.

"For so many of us who grew up in the Islamic Republic of Iran in the 1980s, David Bowie was an inspiration and a refuge from a claustrophobic environment. At a time when you could be lashed or go to jail for owning an audio cassette of western music, we would search all over Tehran for a Bowie album. We listened to anything we could find, from Space Oddity to Young Americans, over and over again. We watched The Man Who Fell to Earth a dozen times without understanding the plot or dialogue. We begged our friends and relatives in the West to send us his latest albums and the most recent books about him.

I will never forget the sadistic school principal who confiscated my David Bowie book, insulting and slapping me around for bringing a book about a cross dresser who kissed other men to school. "Do you want to be a faggot like him!? Don't you know we kill the fags in Iran?" he said as he tore the book into pieces, throwing the shreds in my face. "Should I send you to the Revolutionary Guards and tell them you're a fag!? Do you want to know what they will do to you!?"

I was trembling with fear. It was 1983, and many innocent people had died by the hands of the regime for crimes less than having a picture of Bowie and Lou Reed kissing each other. My only solace was reciting the words of Five Years, which I used to listen to every morning.

Pushing through the market square
So many mothers sighing
News had just come over,
We had five years left to cry in

In those dark days of 1980s Iran, rock music was a glimmer of hope for many of us. David Bowie represented many different identities and personas in the West, but to us in Iran he was a cry against indoctrination and the prejudices that surrounded us. He was among one of our saviors. He transcended music, film and fashion. Things that define our identities and make us human.

Bowie would never be placed high on a list of influential musicians throughout the south as he pushed the limits of artistic expression way past the comfort level of bible-belt sensibility. In spite of that--or actually because of that--it's worth some time to look back at his life and his art and how he merged the two so easily and successfully.

Most Americans know David Bowie for two things; the Ziggy Stardust character and the song Let's Dance. But in fact he was a prodigious writer who's constant need for creative expression was both his strength and weakness. A young David Bowie first wanted to blend his two favorite things, rock and roll and musicals, into a singular concept, believing it to be the next artistic evolutionary step for rock music. If there were three steps from conceptualization to realization on this grand project he achieved two of them; the artistic concept and the music that came out as The Rise and Fall of Ziggy Stardust and the Spiders from Mars. The final step of creating the theatrical play was never taken. He had already moved on to other ideas and couldn't stand the thought of continuing as the character Ziggy Stardust. This constant movement left us with multitudes of material by Bowie, some of which never fully realized. 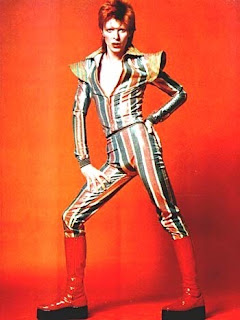 You've got your mother in a whirl
She's not sure if you're a boy or a girl
Hey babe, your hair's alright
Hey babe, let's go out tonight
You like me, and I like it all
We like dancing and we look divine
You love bands when they're playing hard
You want more and you want it fast
They put you down, they say I'm wrong
You tacky thing, you put them on
--Rebel Rebel

The phrase "ahead of his time" is so overused that it has all but lost any meaning. But for this moment in time, as we reflect on the life of David Bowie, we see a person that deserves the label. Bowie was a rebel's rebel. When the counterculture was the blue-jean and t-shirt wearing all-natural hippy, Bowie was playing five moves ahead. "We were creating the 21st century in 1971," said Bowie to Terry Gross on NPR.

Bowie foresaw more than just artistic trends throughout his life. He correctly predicted the downfall of recorded music revenues as we moved towards the digital streaming age, and attempted to stay ahead of the collapse with off-the-wall ideas such as selling "Bowie Bonds." It was 1997.

"You'd better be prepared for doing a lot of touring because that's really the only unique situation that's going to be left," Bowie said. "It's terribly exciting. But on the other hand it doesn't matter if you think it's exciting or not; it's what's going to happen."

Combining post-modernism with artistic hyperactivity, Bowie and his cohorts lived the philosophy of "Everything is rubbish, and rubbish is beautiful." If only everyone's rubbish could be anywhere near as beautiful. Thanks for staying five moves ahead Mr Bowie.

The first music video ever produced in space was of course a David Bowie song.