So it has been a long time since I've written anything here.  I'm not completely sure why,  although I do have a couple of theories.  But I will say that it truly amazes me that people dig the things I write.    I like the process, but I also like connecting with people in this fashion.  I'm like everyone else, I just want to help the world be a little bit better than yesterday.  Maybe I'll succeed, maybe I'll fail, but at least I can say I tried.  How I view the world tomorrow might be different than yesterday, but this is a fun way to look back and see a growing process for me.  As long as there are billions upon billions of people sharing this world together, then there will be many truths for us to discover.  Don't ever settle on just one.  My favorite saying ever:  "Don't believe everything you think."

I should probably point out that pontificating on poor people's political plight is as easy as parrots pulling pianos out of a pond.  But what the hell, let's give it go...

It seems to me that this election cycle is really based on one thing: poor people.  The political stand-off that is occurring with a culture-war veracity is based solely on the alternating views of what it means to be poor and the reasons behind being poor.  This is a fascinating concept, because it rises above the conservative/liberal back and forth sniping, and forces us to confront the fact that different people view the world, and the poor, in completely different ways.

When the economy is strong and growing, and everyone is working, then the size of pie slice that goes to the poor isn't that important.  But when the recklessness and greed of Wall Street has cut the world's wealth in half, then it becomes a central issue.

A conservative and a liberal can argue endlessly about the intended direction of public policy and only go in circles that would make a small town Saturday night dirt-track racer proud.  The reason they will not find common ground is because they can't, or won't, agree on their definition of what the poor experience means.

This fundamental disagreement would be similar to looking at the edge of the Pisgah National Forest in the Appalachian mountains.  I would see it as a place of refuge, peace, solace, comfort, and a place of rejuvenation.  Someone beside me could see it as a place of danger, threats, discomfort, and flat out terror.  So the chance of us finding middle ground on policy and funding for this land would not come easy, and the chance of both of us leaving happy is even smaller. 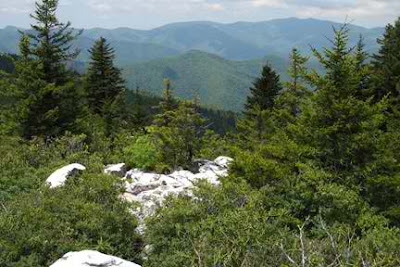 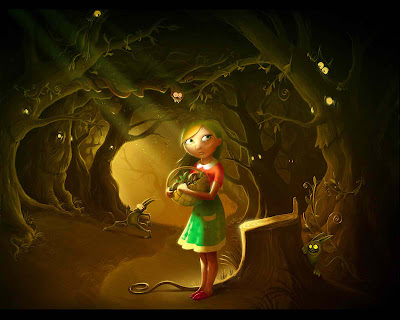 Are we both right and both wrong?  Yes, even though I think I'm a little more right than they are.  You don't have to go far to find proof of both perceptions of the woods.  Our differing views can be traced back to life experience, especially if I grew up in the woods and my friend's experience only consisted of "When Animals Attack" videos on TV.  But there's more to it than that; there can be a distinct personality difference between us, too.  I may find enjoyment in the unknown, in the adventure of new places with limited safety, whereas my friend might get happiness from consistency and insured safety.  Two completely different outlooks that shape who we are and how we interact with our surroundings, and they are both valid.  Another example: look at people's vacation habits.  We all know people that enjoy going to the same beach, staying in the same condo, on the same week every summer.  We also know people that would never visit the same place twice.  When it comes to vacation habits we can easily throw out the cliche "to each their own."  But with today's public policy and the idea of financial scarcity that pervades our culture, we enter into the octagon, where mercy is not shown, and we will beat our world-view into your thick skull with facts on one side, and emotional beliefs on the other.

I first noticed the difference in personality and political views in college when George W. was running against John Kerry. I was exposed to a lot of creative people in Boone, NC: musicians, painters, writers, poets, philosophers...and I started noticing that the more creative a person was the more left they leaned.  Why is this?  Since part of my degree was business management, I spent a lot of time in the business building as well, which was the only part of campus that I felt had a stronger conservative presence. The archetypical college conservative's experience was in fraternity/sorority life, with studies leaning towards the business side.  Of course there are exceptions, but anyone who has spent a lot of time in the microcosm of the collegiate experience will understand what I'm talking about here.

As a lengthy side note, I'm always fascinated by the amount of news stories that come out each election cycle that deal with major artists sending cease and desist letters to the GOP for using their music during rallies, as compared to the Dems having almost a free range of choices. Lately we've seen legal action from the likes of Bruce Springsteen, Tom Petty, John Mellencamp, David Byrne, Sting, Foo Fighters, Van Halen, Survivor (who wouldn't want to use "Eye of the Tiger?") ABBA, Heart, and Dee Snider.  And who can forget Tom Morrello's op-ed piece about Paul Ryan claiming Rage Against the Machine as a favorite band?   From small college bands playing open mic nights to some of the worlds most famous artists, this seems to be the trend. Naming off the few exceptions, such as Kid Rock and Hank Williams, Jr.,  does nothing to this point, as you can prove a broken clock works perfectly if you only look at it twice each day.  Again, it's not a point for arguing or proving, but a point for discussing  and understanding. 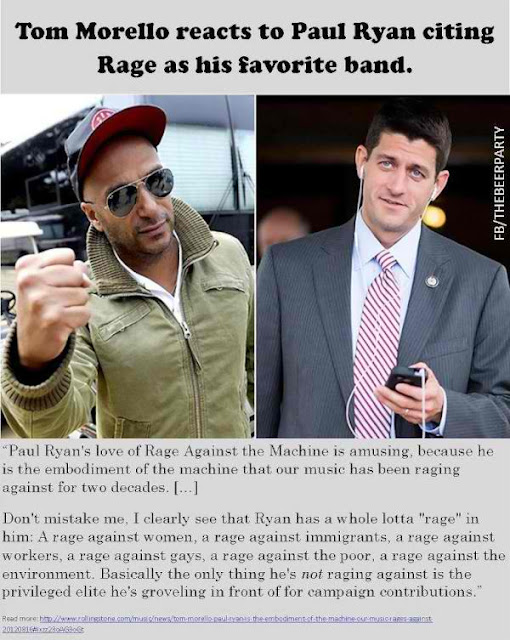 While the urge is strong to argue that since the artists that bring so much beauty into our lives have a specific political leaning, then we/they must be right, I refuse to fall into that trap.  It is more complicated than that, as I alluded to before.  As our personality traits dictate how we view the world around us (as well as whether we dedicate our lives to the arts), our vision of this world dictates how we act both in relation to politics and religion.

As we watch both sides argue about the proper role that our government should play in people's lives we have to understand that the two sides are viewing poor people in a completely different context.  On one hand, you have the type of people that I grew up around in a small mountain town in NC.  You were much more likely to be living below the poverty line than above it, but everyone tried hard to make it.  I grew up around people who would work all week and then work all weekend if their neighbor had some hay or tobacco to put up.  Nobody asked for any help and wouldn't turn down extra work if it was offered.  These are the best and most hardworking people in the world, but they are born poor and they will die poor. It's immoral to allow them to fall through the cracks while healthcare and the cost of living explodes. 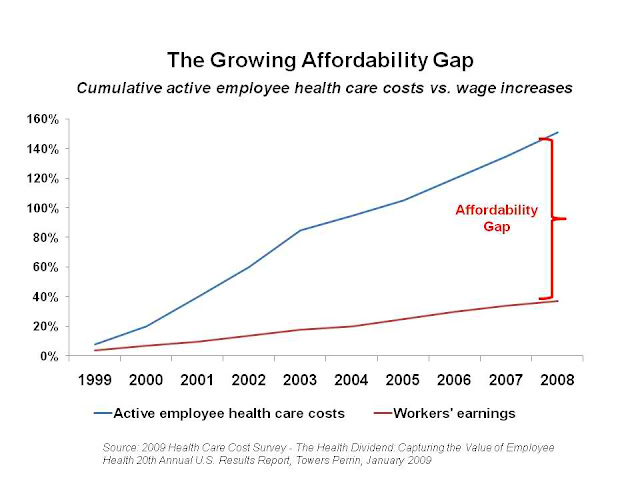 On the other hand, I've noticed that the conservative view of the poor is completely different.  This view, which I believe is strengthened and justified by the neo-christianity of the Joel Osteens of the religious world, is based around the idea that we each choose our own paths, and if you're poor it is your own fault,  mostly because you're lazy and unmotivated.  You would rather live off the government than use the good ole american bootstraps to get yourself into a nice suburban house.  You work the system and use your welfare check to buy booze, cigs, and lotto tickets while having a jolly good laugh about how you're beating the system. 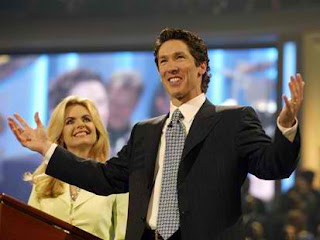 Are both these views a little bit right and a little bit wrong?  Yes, very much so.  Is it impossible to find common ground when the two sides view the issue this differently?  Pretty much.

So how do we fix this mess?  I think the first thing to recognize is that the new research into why we view the world differently is an important part of the reparation process.  If someone believes something differently than you do it is not because they are uninformed, stupid, or immoral, it is because they literally see the world in a different framework, much as color blind people see certain colors differently.

People such as Chris Mooney and Jonathon Haidt are putting out fascinating research into why there is such a thing as a right-wing brain, and a left-wing brain.  Haidt has come up with five intuitions or moral foundations that he believes can show which way your personality will lead you.

Liberals tend to emphasize the first two, while conservatives will typically emphasize the last three.   (One note on #3.  The term "group" is referring more to smaller like-minded groups, such as your church, neighborhood, political party, etc.: people who hold similar life-styles and belief systems.)

Recently a sixth moral foundation has been added, which is how we view liberty and oppression.  If you believe that those terms mean protecting those less fortunate, then it precludes a liberal bias, whereas if you see those terms as "throwing off the chains of big government" you might lean conservative.

If you've ever noticed that conservatives are so amazingly organized and wondered why they are able to focus that organizational power with laser beam intensity, just re-read 3, 4, and 5.   Makes sense doesn't it?  Whereas liberals (and artists) have as much hierarchical discipline as The Goonies running around the underground caves trying to find their way out. 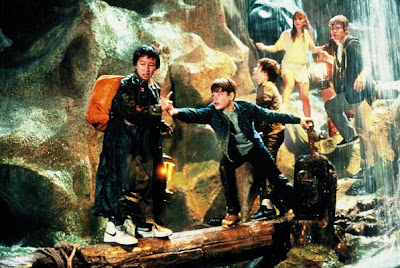 So when it comes to the poor, I will accept rich confusion in return for shallow clarity.  Do we allow the less fortunate to go without the basic services to live, such as food, water, and health care?  No, we do not.  Do we accept that some will abuse this system and put effort into stopping these abuses?  Absolutely!  Most people want to make their own way.  If they have the opportunity to do so they will take it, and any serious analysis of the last 50 years of economic policy will tell us what economic environment creates the most opportunities.  In fact, I realized the other day that if half the analysis was put into economic history that is put into Fantasy Football each week, then we wouldn't have the political stalemate on the issue.

Thanks for hanging with me,
Brian Swenk