One is about a horrific monster from the netherworld with a distorted, blood-sucking face coming up to feed on the weak, and the other is a fantastic 80s throwback TV show that everyone is raving about.

In fact, 2016 is a great year to experience American culture through art, music, and storytelling.

Here are a few highlights: 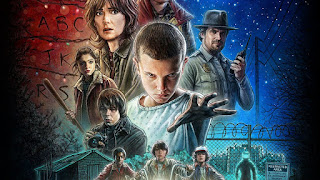 Stranger Things (Netflix) -- If I had gotten this article together 3 weeks ago, I would have been in front of at least some of you on the near-perfection of this show. But at this point, you've either watched it or are planning to watch it. This show deserves all of the accolades being thrown at it, but I'll just add this: whatever show you're currently into will immediately take a backseat until you finish Stranger Things. It's not just a show of great writing and acting, but it's just so damn fun from beginning to end.

Mr Robot -- A dark, stylistic show that explores the fine line between genius and madness while throwing in some computer hacking, S&M, and anti-corporatism to keep things interesting and topical.

The Americans -- After hearing this show consistently mentioned in the "best of" conversations, we started watching it and are in the middle of the 2nd season. It definitely lives up to the hype and does a great job blurring the lines of what we hold to be true in the Cold War.

Music:
Phish 2016 Summer Tour-- While Dead and Company were receiving all the attention of the jam band community, little ole Phish was quietly moving from East to West playing some of the best shows of their career. The only question left to be asked is, "Is 2016 the best tour ever or just one of the best?" Many are comparing it to their mid-90s tours, and as far as energy goes, they are comparable, but in my opinion, for pure inspired on-the-spot creativity, 2016 will go down as the best yet. If you love Phish, do whatever you can to get the recordings--especially shows from SPAC, The Gorge, and San Francisco. The band played 205 songs in 20 shows, 84 of them were only played once during the tour. The Phish is on The Fire.

Dead and Company -- of course.  This formation has exceeded even the highest expectations in both the quality of music and, even more surprisingly, the acceptance from the Deadhead community that holds the playing of Garcia on a sacred level. Oteil and Mayer have proved to be the perfect combination to revive the original spirit of the music, much like Warren Haynes and Derek Trucks did for the Allman Brothers. 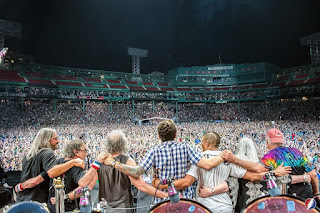 Small Music Festivals -- With many national festivals canceling for financial reasons, smaller, local festivals are growing by giving fans and bands a more engaging experience. Find one near you and take a chance with it.

Book:
Sapiens: A Brief History of Humankind by Yuval Noah Harari -- This book was first published in English in 2014 and has slowly made its way up to the national level by being featured on various NPR shows and being consistently labeled a "must-read" by intellectual explorers. Most recently Bill Gates included it on his "10 books to take if you were marooned on a desert island" list.

Harari is an expert at conveying the grand historical theories with ease and excitement. But unlike many experts, Harari is not afraid to argue his opinions with confidence, knowing he doesn't have the watertight evidence to fully back them up. I love when smart people are willing to take intellectual chances; even when you see the obvious holes in the arguments, you're still better off for experiencing them fully. This aligns with one of the greatest questions you can ask someone: What do you believe that you can't prove?

Tribe by Sebastian Junger. Junger is one of the many writers listing Sapiens as one of the most important books of modern times, and Tribe is basically a spinoff of it. Junger explores the deep psychological and emotional connection soldiers form with each other during battle. We assume war must be the worst experience possible, but why do so many returning soldiers want to go back? Junger believes that the bonds formed within a combat unit tap into the evolution of millions of years of tribal living, and the tight emotional connections are powerful enough to overcome the daily danger and possible death.

Podcasts:
Revisionist History, by Malcolm Gladwell. The premise of this great show is to look back at events and institutions with fresh eyes and discover hidden truths about their functions and societal effects. The first three episodes look at education, from gifted inner-city kids to the multi-million dollar university donations. You won't look at college costs the same way. In one of the more compelling episodes, Gladwell investigates with "stuck accelerator" phenomenon in vehicles that was responsible for over a dozen deaths and billions of dollars of fines and recalls. Be sure to start from the first episode.

Also:
Trumpcast by Jacob Weisberg. As bad as things are in today's Presidential race, the rise of Trump can teach us more about who we are and what we want, both good and bad, politically and culturally than any other event. This podcast does a great job exploring every angle, and hearing trump impersonator John Di Domenico read his actual tweets is worth the download alone.

Outside of the political climate, 2016 is a great year for American music, arts, and culture. We are experiencing a true Golden Age of Writing that's easily accessible in television, podcasts, fiction, and non-fiction. Each discovery leads to another mind-blowing book, show, or set of ideas and theories from some of the most fascinating minds alive. In the age of the internet, there's no excuse not to find them and enjoy every second.
--Brian Paul Swenk