Cognitive Dissonance -- The term that has been pulsing through my head lately with the same lumbering intensity as that damn flashing yellow traffic light that you would sit and watch for 10 minutes with your best friend, stoned, thinking that eventually it would turn green.  And much like that light, you can sit there all night, but staring at it will not make it turn green.

It's a term that can be used for many facets of our emotional identities, but it was created within a religious framework and interestingly seems to be the most comfortable staying there.   The simple definition is the discomfort a person experiences when holding conflicting ideas simultaneously, or when the reality of an experience doesn't match our pre-conceived expectations of the experience.   The question is not, "Do you experience cognitive dissonance?" but "How do you react to it when you do?"   It's a fascinating concept and one that has been on my mind for several days now. 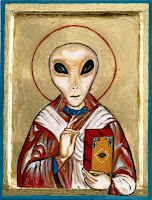 In  the early 1950's the term and theory were coined when the social psychologist Leon Festinger infiltrated a cult that believed a UFO  was going to rescue them at a specific time and date before the earth was destroyed by God.   (How many psychology theories have kick-ass beginnings like this?)  The theory of cognitive dissonance attempts to predict how people will behave after these fervent beliefs clash with reality.  Festinger properly predicted that the group would re-group and actively start proselytizing and recruiting new members which would reduce the dissonance they experienced when the UFO forgot to pick them up.  What? Did you expect them to actually realize that the entire thing was a sham and go back to their normal lives?  Yeah...not so much.

How does this theory of cognitive dissonance work in our everyday lives?  And is it inherently bad or is there a healthy level that can be maintained?  (Questions upon Questions...oh how you torment me)

I tried to come up with a spectrum that could give us an idea of what extreme cases of cognitive dissonance look like, and surprisingly (but not really) both examples stayed within the religious paradigm.   Without being an expert, I imagine that someone who has achieved (or is working towards) eradicating all vestiges of dissonance would look like a Buddhist monk; sitting in a plain robe meditating on the "power of now" without being disturbed by thoughts of the past or future.   Cognitive dissonance is bound to the idea of self, and by giving up your self you are able to release this resistance of what we all know as the ups and downs of daily life (or as the first of four Noble Truths of Buddhism, "Life means suffering).   Most of us choose to not go this route as we accept the idea of self, and with it, the peaks and valleys, the loves and losses, the fears and joys of daily life.  This causes me to wonder if there's a healthy level of CogDis that can steer us towards achieving either our desired lifelong fulfillment, or at the very least, our daily goals.  A level that pushes us to achieve more than we expected.  A level that compels us to work hard each day and search for resolution to this dissonance and in doing so become a better person.  The resolution of a musical phrase can have much more impact because of the dissonance that precedes it.  It is the ebb and flow of life, always searching for resolution.

Deciding on a specific example at the other end of the spectrum isn't as easy, since high-levels of CogDis can take many different forms; but I've found that the choices tend to stay within the religious paradigm, since religion is the one place that extreme beliefs can hold strong roots against all rational thought and scientific evidence to the contrary. Was there any evidence that the UFO was coming?  No.  Is there any evidence that the earth is only 6000 years old, was created in 6 days, and dinosaurs lived alongside the first descendants of Adam and Eve? No. Yet people will defend these beliefs until the bitter end, even giving up their lives for them.

(A quick note: Although this theory works well within the religious paradigm, it is not specifically relegated to it.   Smokers are a good example of people who deal with high levels of CogDis.   Most all smokers will claim the desire to live a long and healthy life, but their daily addiction to the poison of nicotine directly clashes with that desire of being healthy. Smokers will attempt to reduce their level of CogDis by saying things like, "Well, we all die from something! (wink wink nudge nudge);"  which is an absurd rationalization for poisoning yourself, but they just don't have many other options.)

So what is a good example of extreme levels CogDis for our spectrum?  Obviously the people that sat in the dark waiting for the UFO to pick them up.  But what about someone like Ted Haggart, the Evangelical pastor who repeatedly preached about the evils of homosexuality while paying a gay prostitute for sex and drugs for up to 3 years? Haggert had to experience very extreme levels of CogDis, as did the multitudes of Catholic priests that repeatedly molested children for decades. I can't think of a more extreme example than this; someone dedicates their entire life to what is supposed to be the purest path and yet still commit what is easily the worst crime against fellow humans.

OK, so you and I fall somewhere in-between Buddhist Monks and pedophile priests.  I've had worse realizations!

It's a funny thought, but it doesn't matter at all.   What matters is how we deal with our CogDis in accordance with our own daily lives.   Are we honest with ourselves and, just as importantly, with others around us?  Do we know deep down of a weakness that we can work to address?  Do we need to adjust our daily habits to more closely resemble our ideas of ourselves and what we want to achieve before it is too late?  Or are we just telling ourselves these things and allowing unhealthy levels of CogDis disrupt the balance of our emotional lives?

Like I said, it's a very interesting concept, and one that can benefit us if used to broaden our self-awareness.   Obviously we (as in the non-Buddhist monks) are not able to live without some level of CogDis in our lives, but I wonder how we can channel it properly to be advantageous? That's the American way, right? Use everything we can to move on up! Is it what we feel when we try our best to live up to our self-expectations, so the reality of the experience is in accordance with what we expected out of ourselves? Is this why I would sit and practice for 8 hours a day? So the actual experience of playing music would be as joyful as I expected it to be? Possibly, or maybe I just didn't want to allow the banjo to win.

I've challenged myself to be more aware of the reasons for CogDis in my life and either resolve the issue or channel it to my favor.   If I can reduce daily stress by even 1% then it is worth it.   Who knows, maybe I'll even start enjoying people's company...that would be a miracle.  Just kidding, I love all of y'all...mostly.

Reading through some really great terms from the mesmerizing book "1984" I came across this.  Very fitting for this discussion.  And once again this book proves to be one of the most prophetic books the English language has ever known.
Here is how Winston Smith described doublethink in the novel:
"To know and not to know, to be conscious of complete truthfulness while telling carefully constructed lies, to hold simultaneously two opinions which cancelled out, knowing them to be contradictory and believing in both of them, to use logic against logic, to repudiate morality while laying claim to it, to believe that democracy was impossible and that the Party was the guardian of democracy, to forget whatever it was necessary to forget, then to draw it back into memory again at the moment when it was needed, and then promptly to forget it again: and above all, to apply the same process to the process itself. That was the ultimate subtlety: consciously to induce unconsciousness, and then, once again, to become unconscious of the act of hypnosis you had just performed. Even to understand the word 'doublethink' involved the use of doublethink.'