Happiness is a Greasy Fire Hose in a Purple Pudding Pit

What is happiness?  I might have an answer.   Happiness is what everyone else has and you/me/us/we are trying so hard to get.    We live in a culture that has decided that happiness is the final answer and measuring stick to every single endeavor.   No matter that it is harder to hold onto than a greasy fire hose in a purple pudding pit.

It's not that everyone is miserable, but I think the important thing to understand is that happiness is fleeting, it comes and it goes--it's there when you don't expect it and it won't stay as long as you want.   But when we allow our snowflake storm pseudo-sitcom society to convince us that we should be happy all the time -every second of every day- then we can actually create stress in our daily lives because we "don't feel continuously happy" which snowballs into this country leading the world in anti-depressants but scoring low in overall happiness. What a cycle.

We need to shift the focus of our daily actions from the search of happiness and pleasure to intention.  Instead of waking up each day and wondering how we can make ourselves happy, we can wake up and decide on our intention for the day.  Let happiness be the bloom of a flower that comes and goes on its own schedule.

Sometimes I wonder if happiness is even real or if it's just an elusive concept.  Or maybe it's just a combination of actually feeling relaxed, or engaged, or challenged, or accomplished, or amused or content.   Maybe happiness doesn't even exist and we are stressing ourselves to death (literally) for an imagined concept.  Wouldn't that be a great irony of life? 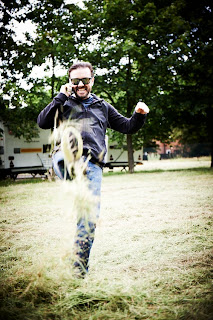 Ricky Gervais wrote a really great blog/article about a new project he's working on, and the first half really caught me.  He describes how he was the ultimate slacker throughout the first part of his life until he tried something new when he created the English version of "The Office."   For the first time in his life he tried his hardest.   And he became addicted.   Not to success, or work, or money or fame, but to giving it his all.  It's interesting that he never claims that he's happier, but you can feel it in his writing - it's palpable.

University of Pennsylvania psychologist Martin Seligman wrote in his 2002 book Authentic Happiness that happiness involves three components; pleasure (the great googly feeling), engagement (the depth of involvement with one's family, work, romance and hobbies), and meaning (using personal strengths to serve some larger end).  And his research shows that one of these components factors much less in overall contentment.   And ironically it's the one component that our culture seems to pursue the most: pleasure.   Engagement and meaning are much more important to overall satisfaction and, I believe, come from daily intention as well as hard work.

The question of "what makes us happy?" is very interesting because in some ways we don't really know.   Hungarian-born psychologist Mihaly Csikszentmihalyi (pronounced "cheeks sent me high") who is known for his research on happiness and creativity, as well as the introducing the concept of "Flow" (think Michael Jordan in game 7 of NBA finals) came up with a brilliant experiment on how to find out what really makes us happy.   Nearly everyone will always answer "my family, or my children."   But when people are asked to rate their moods at different parts of the day (whenever a beeper goes off) we find that children and family are typically the main cause of frustration and stress.   There is a disconnect between what people believe makes them happy and what actually makes them happy.   Perceived happiness has differentiating factors, such as our memories of experiences can be jaded by the final moments of the experience, and also the very human tendency to romanticize the past...you know, "the good 'ol days"

After family, people will list their work as another main source of happiness, contentment, frustration, or stress.    Are we successful? Are we moving forward?  Are we financially secure?  If not, now do we get there?

Several years ago I got a taste of the corporate world.  Now keep in mind that this was in Asheville NC, so it was a very laid back version of the corporate world, complete with shorts, t-shirts, and flip-flops (Asheville was ranked as the happiest place in the world!); but for a banjo picker from Sparta NC it was a didactic experience.   At one point we all were caught up in "The Secret" where you make vision boards and all the great things in life will come to you because you imagine them coming to you.   The Law of Attraction.

This is a a very sexy concept, and was featured multiple times on Oprah (so it MUST be legit!),  but there was something that just didn't feel right about it, and it took reading Rick Pitino's fantastic book Success is a Choice for me to be able to vocalize what.   Pitino lays out 10 steps in his book, but you can reduce the book to two words: Hard Work.   And say what you will about his personal life lately, but when someone coaches a kid who supposedly has no chance to play in the NBA, and works hard enough to become the league's MVP, then I respect that process! Pitino also took a team that was ranked at the bottom of their conference to the final game of the Final Four tournament.   He's a master at setting high goals and achieving them and he didn't do it by sitting at his desk staring at a "vision board."  He pushed pushed pushed and taught his players that they had the ability to rise to a level they never expected.  (the vision board link is to a clip of the great show Always Sunny in Philadelphia)

Getting there early, staying late, pushing yourself past your (imagined) limits, concentrating on weaknesses.   These are the things that separate people who have greater amounts of engagement and meaning from people who only search out pleasure, and therefore have more satisfaction and contentment with their lives. 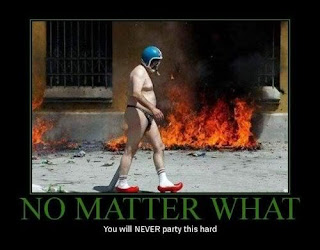 But today's culture preaches the opposite.  Is it no fun?  Then don't do it!   Is it not pleasurable? Then stay away from it!  Does it not provide immediate satisfaction?   No wonder we are falling behind the rest of the world in everything!

In some ways I consider myself lucky.   I get paid to do something that I would gladly do for free.  And I can see where people would look at us and think that we "have it made."  But what people don't see are the hours, days, months, years, of working our asses off for nothing.   It probably adds up to about 30 cents an hour...maybe.    People will follow the phrase, "Be Happy"  with, "Do What You Love."  And I have a  problem with that since nobody can just quit their job and "do what they love."  It's deceiving.   But everyone can work to create a life situation that has more engagement and meaning, and that takes waking up every day with a set intention and path.  What is your intention for today? 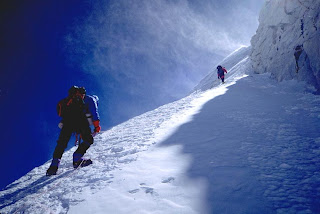 If you want to attempt to make a living doing something that you enjoy then you have to be prepared to give up a large part of your life to do so.   You have to WORK YOUR ASS OFF!   It's not always fun,  it's not always pleasurable, and the phrase "delayed gratification" becomes an understatement.   But it's worth it! Oh man, is it ever worth it!   I don't regret a single party that I missed because I was practicing, in fact if I could do it over again, I would go to a lot less parties in college and practice more.

“No one who can rise before dawn 360 days a year fails to make his family rich.” – Old Chinese proverb

Search for engagement and meaning in each day.  Don't worry about pleasure or happiness, and stop putting things off because they're "hard."  Anytime something appears to be too hard imagine what the Navy SEALs go through on a daily basis and proper perspective comes popping past you with perfect precision. 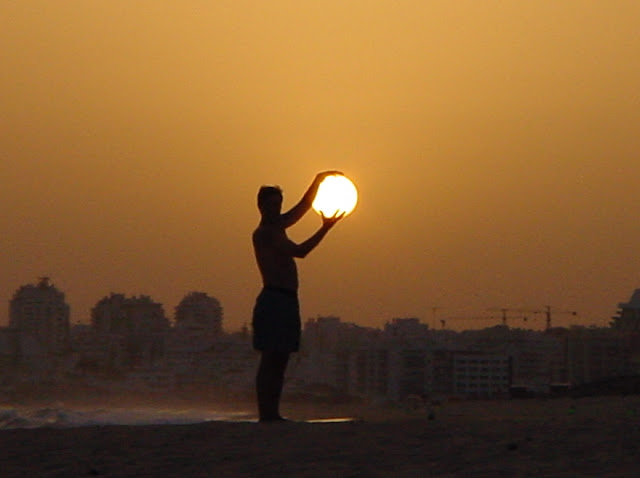