"People don't know exactly what they want, but as one friend of mine put it, they know one thing: FUCK THIS SHIT! We want something different: a different life, with different values, or at least a chance at different values."  --M. Taibbi


Something has to give.  We can't continue on this path and give our grandchildren and great-grandchildren the life we want them to have.  Populations are exploding, and our oceans, rain-forests, and middle-class are dying.  We can pretend that those 3 things don't factor into our future, but you have to shut off any sense of reason to do so.  People who consistently look for new paths, new ideas, new connections are able to experience moments of clarity when things suddenly make sense, where several pieces of the puzzle suddenly  snap into place, creating a new picture that was not expected.   Two weeks ago I stumbled across an amazing video that articulated the visceral drive of the people protesting the current dirty affair between money and politics in this country.  But first, a few thoughts.


The coverage of the Occupy Movement has been run into the ground by the 24-hour news cycle media; as one of my friends put it, "If I hear the word 'occupy' one more time, I'm going to lose it."  The protests started in the most beautiful sense that I've ever witnessed.  "We are the 99%" was a beautiful slogan that rightfully stated the true division of power, but through the combination of the Fox News Agenda and also of the Left Wing extremists taking over the discourse, the movement has been mostly divided back into the 49% vs 49% that so easily fits the standard media narrative.   If we keep it framed within this comfortable narrative then nobody has to stretch their ego-centric world-view to see a possible new path. If the story is 49% vs 49% then everything stays the same.  But if the story is 99% vs 1% then there is a chance for fundamental change in how Americans not only view our place in the global economic village but also how we focus our daily energy and how we define our "success."


But if you look close enough, and if you forget about arbitrary labels, then there is a tiny sliver of light breaking through the cracks.  A light that asks the questions, "Are you ok? Are we ok? Does the current zeitgeist feel right to you?"  The reason the protests took off with such speed and force throughout the world is that the answer is a general, "No.  We don't feel ok," and "No.  The current state of our society doesn't feel ok either."  Something isn't right and we can feel it, but we aren't sure what it is, and the easiest and quickest answer is to just blame the other side.  Blame the liberals, blame the conservatives.   Blame al Qaeda, blame the Chinese.   Blame the poor, blame the rich.  And on and on.  We have to blame somebody right?


Is it getting better?
Or do you feel the same?
Will it make it easier on you now?
You got someone to blame
U2 - One

If we can just get those people out of our way then everything will be fine again; and just like an episode of The Andy Griffith Show, all will be fixed by supper time.  The first step to expanding our consciousness out of this endless blame cycle is to stop thinking in terms of labels.   There is only one label that will produce positive results: the human label.  It is important to realize that there are no such things as liberals or conservatives, republicans or democrats.  These are completely arbitrary terms that have no meaning other than to allow us to not only be divided and controlled, but also give us permission to turn off our brains and our sense of reason.   "I'm a conservative so therefore I believe this."   Or, "I'm a liberal so therefore I believe this."  Without any recognition that the given list of beliefs contains absurd contradictions and unyielding stances that by their very nature stop viable, workable solutions in their tracks.  It is almost as if the powers that be stood beside each other and picked hot-button social issues like an 8th grade gym class: "I'll take abortion rights.  Ok, I'll take gun rights.  I'll be against the death penalty.  Ok, well it is weird that I will be both pro-life and pro-death penalty, but what the hell,  they won't notice!"  And on and on...


I wish my writing could begin to match the beauty, elegance, and wisdom of Charles Eisenstein, but I am smart enough to know when to let someone's words shine.   Every line has a vast depth and meaning that is rare in today's pop-culture world, and it is important to recognize when someone so beautifully articulates the feeling in our collective hearts.


What we are missing in today's money-based economy is our sense of meaning and purpose, and I believe that the majority of stress and unhappiness comes from the lack of these vital ingredients of a balanced life.   Eisenstein does a beautiful job of explaining that the top 1% are also missing these things, and their sense of unfulfillment is even stronger since, in the view of our money-based society, they theoretically have everything. "It's lonely at the top."    We've all seen the bitter Mr Burns character that sits alone in his mega-mansion suffering suffering from loneliness and isolation, and it is a near universal reaction that none of us would desire this.  Given the choice we will always claim  to pick love and community over wealth, but a strange disconnect happens when we spend our lives obsessing over the very thing we claim to not desire.


“Someone asked us if we make money doing this... the answer is no... we make art, friends, emotions, adventures, songs, ideas, changes, noise, we make ourselves happy, and hopefully a few other folks happy along the way. Those are the things that we make. Who needs money?!” 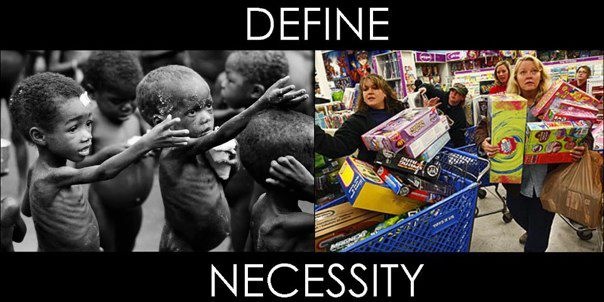 In many ways the ongoing global depression has forced us to reconnect with both our community and our extended family.  Many are forced into roles of needing the people closest to them.  We are now depending on one and another in ways reminiscent of the last economic depression, and it is important to recognize that this is a positive transition for us.  When the federal government proves inept, we will find local solutions that not only solve direct problems but also strengthen the sense of community around us.  Sometimes 1 +1 can = 3, or 4.   If we are able, or even forced, to change the current paradigm from unbridled consumerism to service and support for those around us we will have the chance to re-develop the connective tissue that provides us with purpose and meaning, thereby filling the gaps in life with what is actually important.   The modern day financial philosophy that every person should have enough money that they can become an independent island and not need anybody for anything is an unsustainable idea and is fortunately dying a slow death.  The very act of having an important role in your community, of being needed, creates vitality, energy and love that symbiotically builds on itself.

Hope everyone is having a great week.
Brian