As the GOP voting bloc dwindles, will they find a unifying message for 2016?

Daniel J. McGraw has penned an interesting article for Politico about the higher mortality rates for Republican voters and how it will play into the general election numbers of 2016. The wide discrepancy of average age between Democratic voters and Republican voters is one of several big factors currently in the Dems favor, and it is one that cannot be overcome by marketing and on-point message.

The GOP has two main problems: a basic numbers problem (they’ve only won the popular vote once in 25 years, with a much larger base voting bloc under wartime conditions, when a country will typically rally behind their leaders) and the intoxicating strategy of divisiveness that has been so successful in the mid-term elections when voter turnout is so staggeringly low.

These two problems are unique but still interrelated, and they combine to pose a major obstacle in a serious run for the White House in 2016.

As the older, and predominantly Republican, American population ages out of voting ability (a fancy way of saying "dies") they are replaced by two primary groups: millennials coming of age and the large numbers of Hispanic immigrants who are now citizens--both of which overwhelmingly vote (when they do vote) Democratic. Losing voters on both ends of the spectrum is a massive problem for the GOP. This issue is not being openly addressed by the GOP, and it doesn’t even seem to be recognized by the party as a whole.

The inability to confront this issue comes from a myopic laziness that has grown from easy and fast midterm election gains.  The divide-and-conquer midterm election strategy has morphed into its own beast in today’s hyper-politicized environment, and the intoxicating effect of winning has paralyzed today’s hopeful candidates. The GOP have become masters at understanding that the key to midterm gains is to not confront national issues or win votes from the 1-2% of undecided voters as with a general election, but to energize their hard-core base. You don’t do this with policy, problem-solving, or congressional effectiveness. You do this with emotion and division. They are the problem (poor, immigrants, gays), and we are the solution (job creators, guns, evangelicals).That’s the message; stay on it and reap the rewards. The more divisive language you can spread through the base, the better chance of getting that base to vote in a mid-term election. 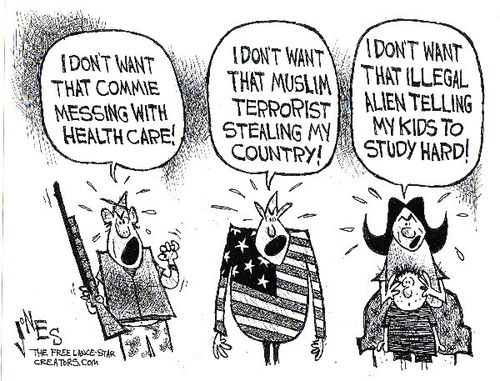 The problem is that no one has told these 20-some-odd current GOP candidates that this strategy will not work in today’s national election for one simple reason: more people vote. And yet, Mike Huckabee is banking on the strategy so heavily that he’s written an entire book about the differences of the “bubbas--" good ole rural white folks who form the backbone of this country--and the “bubbles--" the liberal, tree-huggin', artsy, welfare-sucking city slickers who are bringing this country down. Now just imagine for a brief second the candidates coming down the home-stretch of the national election and one of them campaigning with that message. (Some will argue that his entire campaign is just a publicity stunt to further his public persona career. I’ve yet to see any sign that he is anything but genuinely convinced this strategy could work.)

Huckabee serves as a caricature of what the party has devolved to, as his divisiveness is more Hee-Haw-silly than hateful. But the eventual nominee will have to rise above that divisiveness and recognize that winning a national election will have to involve some type of unifying message, which becomes another problem for Republicans.

As a country, we are tired of war, and we are tired of all the economic gains going to the 1%. We are tired of the constant hate for poor people, minorities, immigrants, gay people, and women’s rights. We are tired of the wedge issues, such as abortion. We finally see through the masquerade of trickle-down economics. We see the crumbling infrastructure with no desire to fund it. Gun rights only go so far, and for that matter, we’re tired of the NRA running Congress. So tell me: what will be the rational, reality-based, unifying GOP message that will bring in the undecideds and independents?

There is a good possibility that we’ve entered a long-term stalemate of GOP state and local control and democratic presidential control. Of course, this is more or less how our government was created to exist--with balancing forces. But the political forefathers did not envision a time when our leaders refused to confront and solve national problems. If you inject enough greed, toxicity, and power-grabbing, even democracy has its limits.