Right Wing Extremism, fed by fear and hate, is our biggest threat.


“You rape our women and you’re taking over our country. And you have to go.” -- Dylann Roof, suspected Charleston shooter.

"We have to TAKE OUR COUNTRY BACK!"  Nearly every GOP candidate within their election cycle, echoing the constant mantra of Rush Limbaugh, Glen Beck, Ann Coulter, and most at Fox News. 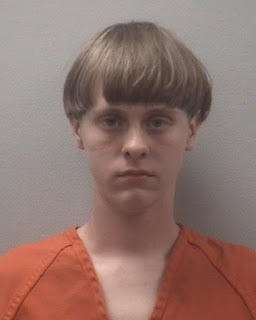 Just a few days ago, the NY Times published an op-ed about the threat of right-wing extremism. In The Other Terror Threat, Charles Kurzman and David Schanzer write: "The main terrorist threat in the United States is not from violent Muslim extremists, but from right-wing extremists. Just ask the police."

"In a survey we conducted with the Police Executive Research Forum last year of 382 law enforcement agencies, 74 percent reported anti-government extremism as one of the top three terrorist threats in their jurisdiction; 39 percent listed extremism connected with Al Qaeda or like-minded terrorist organizations. And only 3 percent identified the threat from Muslim extremists as severe, compared with 7 percent for anti-government and other forms of extremism.

"Despite public anxiety about extremists inspired by Al Qaeda and the Islamic State, the number of violent plots by such individuals has remained very low. Since 9/11, an average of nine American Muslims per year have been involved in an average of six terrorism-related plots against targets in the United States. Most were disrupted, but the 20 plots that were carried out accounted for 50 fatalities over the past 13 and a half years.

"In contrast, right-wing extremists averaged 337 attacks per year in the decade after 9/11, causing a total of 254 fatalities, according to a study by Arie Perliger, a professor at the United States Military Academy’s Combating Terrorism Center. The toll has increased since the study was released in 2012."

The days of fooling ourselves into thinking that all of these are just "lone-wolf" attacks by disturbed people are coming to an end. The trends have been apparent for a long time, but a potent mixture of self-denial, racism, jingoism, and a passionate love affair with guns have conveniently allowed us to ignore the forces that help create such hate.

Sometimes understanding and perspective have to sneak into the backdoor before they can be recognized as reality. The higher the cognitive dissonance within a group of people, the less likely they will accept anything other than their chosen beliefs, no matter what evidence is presented.  (That's why comedians are such powerful agents for social change. If you can make people laugh they will drop their ideological shields for a brief moment.)  We've been forced to confront an uncomfortable truth of ideological causation brought about from the hypocrisy of blaming groups, and their ideological underpinnings, such as the "black community" or the "Muslim community" for acts of terror.

Right-wing extremism and hate groups have exploded since President Obama took office, and the currency that fuels this growth is hate and fear. Both of these are strong political tools for spreading individual interests and specific power-structures to benefit a small minority of very rich people. You don't have to go far within media to find national broadcasters talk about how we've lost "our" country to "them." You don't have to go far to find overt racist remarks about our President. You don't have to go far to find people preaching that this country is on the verge of collapse, that it will soon be overrun by people of color, and that the good-ole white-folk will be put in concentration camps. To the rational, this sounds crazy. To people who are naturally paranoid and full of fear, this sounds increasingly reasonable.

Right-wing extremism and the violence acted out is a by-product of gaining power through the spread of fear and hate. Glen Beck, Alex Jones, Limbaugh, Coulter, Ted Nugent and Fox News have built empires preying on the ignorant and fearful. It is classic cult-building phenomenon that has been studied for centuries:

1) Create the "in-group."
2) Show them the world is "out to get you."
3) Claim insider information that only you have and everyone outside the group will deny.
4) Consistently ratchet up the fear to grow in numbers and strength.

Most in the media do this only for ratings, and I'm sure none of the aforementioned would ever want acts of violence to come from their fear-mongering.  But when fear-mongering is mixed with mental illness, isolation, and boiling anger, the unfortunate resulting reaction is often violence.

Roof's statement, "You rape our women and you’re taking over our country. And you have to go," (emphasis mine) is all too familiar within the right-wing extremist communities.

The national voices that endlessly loop these fears every single day need to be put in check--not by silencing them, but by publicly shaming them. We need to mock the absurd notions that Obama is going to come take all our guns, that Obama is going to take over Texas with a secret military drill called "Jade Helm," or whatever other paranoid conspiracy theory of the day is going around. They have a right to say them. We have a right and duty to publicly shame them.  Fear-mongering for profit needs to go out of style. Rational thought needs to come back in.

If the nation's law enforcement agencies are more worried about right-wing extremism than Muslim terrorists, then we need to confront reality and, as a national community, help ratchet the fear-mongering back down. It has been done before with the KKK and is currently happening with the anti-vaxxer movement, and there's no reason we can't do it again. As fractured as this country feels, we still have the power to spread awareness and combat ignorance and hate.