What the hell happened to True Detective?

True Detective has one extended 90-minute episode left to wrap up a mess of a season. Even with the last two episodes, "Church in Ruins" and "Black Maps and Hotel Rooms," catching a spark reminiscent of the first season, the finale would need to be a hail Mary miracle shot to keep this season from being remembered as anything but disappointing. 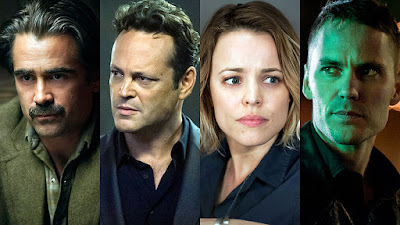 Nobody needed or even expected season 2 to top season 1. The first season rightfully sits on top of the throne of this second golden age of television. Creator Nic Pizzolatto's introduction into television was like a pinch-hitter hitting a grand-slam to win game 7 of the World Series. We tuned into it because of the star power of McConaughey, Harrelson, and HBO and stayed because Pizzolatto's writing took all three to new, unexpected heights.

"Who is this guy and how did he just make one of the greatest shows in history?" 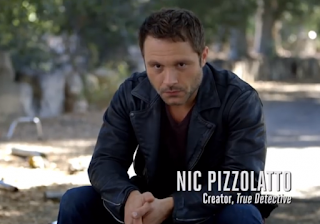 If Season 1 was a 10 (and it was!), Season 2 could have come in at a 7 and we would have been satisfied. But instead, we are stuck with a mess of a story that most of us are only keeping up with on good faith.

The most obvious pot-shot to take at this season is the confusing amount of characters who may or may not be integral to the story line. Three weeks ago, Buzzfeed put out an article titled
This Is For Everyone Who Is Totally Confused By Season 2 Of “True Detective.”  I'll wager most of us were provided some clarity by this simple recap of characters and events, which intertwine, at this point, with the grace and direction of pixie pickup sticks.

"Maybe you even thought the city of Vinci was a character, too," writes Buzzfeed author Kirsten King.


Velcoro, Vera, Caspere, Bezzerides, Osip Agronov, Delvayo, Chessani, Amerilla--all beautiful names no doubt, but when you combine them with hushed mobster-like whispers, Colin Farrell talking with marbles in his mouth, and random shuffled mentions in deeply insinuated dialogue, it gets confusing quickly. I'm pretty sure I thought "Vinci" was a character at some point, too. 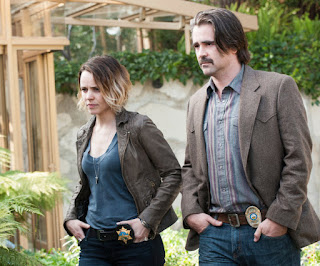 A multitude of characters and complex, interwoven storylines are far from narrative sin. In the right hands that combo has the power to change the course of television, e.g. Game of Thrones or The Wire. The sin that is yet to be atoned for is not giving the audience something to care about--which is, most surprisingly, the complete opposite experience of the first season.

The first season's magic was that, in some form or other, we cared for, empathized with, or at least felt pity for nearly every character that came across the screen. We tenuously held onto a sense of reality with Rust Cohle. We felt the guilt of Marty Hart as he tried, and failed, to be the moral man he wanted to be. We even understood the pain and helplessness of people like Charlie Lange.
There is one episode left in this season, and we are still trying to find something to attach ourselves to. The relationships between the three investigators have been distant at best and robotic at worst-- other than the most recent scene of Bezzerides and Velcoro finally giving into some natural human urges other than violence. The secondary familial relationships seem to keep the over-arching show themes of dysfunctional detachment and loneliness alive, but otherwise they just eat up time. The murder victim is shady and corrupt, so who cares if we find his killer? Frank Semyon, played by a much-too-dry Vince Vaughn, should be one of the characters we're rooting for but has mostly stayed one-dimensional.  And somehow we're supposed to be interested in the motives behind land and parcel transfers, highway development, and guaranteed overages?

Season 2 is working so hard to establish its own unique identity, in many ways succeeding in that. But that success of identity separation only comes at the price of losing the spark of the intrepid, existential banter that drove season one. It's an interesting paradox, that to truly understand its failings we have to refer back to what it is running from in the first place.

A writer I highly admire, Erik Adams, reviewed the first episode of the second season for AV Club with the following:

"'The Western Book Of The Dead' feels like a kid starting classes at a school where an older sibling’s reputation precedes them. Big brother was popular with the brains and the jocks alike, an effortless charmer who also had a bit of philosophical mystique to him. He left cryptic scribblings in his notebook margins and gave a stoned pronouncement about the human condition as his yearbook quote, yet he was still crowned prom king."

History will probably treat this season better than our first impressions, and it could fall into the "Oh, now I get it" category, as happened with The Wire, Deadwood, and Freaks and Geeks.  Maybe upon second viewing we'll see the vision and intent with more clarity. Maybe we will start to appreciate the power of the inescapable demons lurking in these characters' pasts as they push them forward or hold them back in every moment.

Pizzolatto set out to create a whole new identity with season 2, not just with stylistic adjustments as most artists do, but a Garth Brooks-to-Chris Gaines complete identity swap. From an artistic standpoint, that takes guts--major guts! From a success standpoint, you are either going to hit another grand slam or go down swinging. Maybe not a lose-the-game strikeout, but a put-your-team-behind strikeout. Whatever happens this Sunday night, we should remember that the second season of HBO's The Wire was its weakest as well, and that show changed television. I'm already looking forward to seeing where the demons of season 2 will inspire season 3.