[This review does not contain spoilers. It's a fictionalized historical account--we already know what happened]

Can television be great art?

The simple answer, I believe, is "yes."

The more complex answer, considering it an extension of today's golden age of writing and acting, is also "yes."

The sixth episode of American Crime Story: The People vs OJ Simpson will most likely be the best episode of this surprisingly great series, but it could also go down as one of the best hours of television this year.

The characteristics of what makes art great depends on what form and even what derivative we consider. Writing, combined with acting, whether on TV, movies, or on stage, has the ability to change us by living, even for a brief moment, as someone else. The power to make us forget who we are and, much more importantly, what we believe is the ultimate shape-shifting transcendent time-machine. The classic 80s show Quantum Leap, where actor Scott Bakula travelled through time and inhabited other people's bodies for a short time, wasn't about time travel as much as it was about the basic act of watching stories in moving picture form. In a creatively artistic way, it was subversive meta-television.

Episode 6 of American Crime Story: The People vs OJ Simpson places us within the body of Marcia Clark, the LA County prosecutor in charge of the court trial that, at this point, is beginning to spin wildly out of control.

When the series was announced it felt like someone was dragging a bag of old garbage back inside, hoping to find something of slight value to make a quick buck. Most of us lived through this moment when, to put it mildly, a media-whore of a judge allowed the trial to be broadcast on live television and millions around the world watched in real-time how money and fame trumps our judicial system. "Do we really need to live it again?" many of us asked both vocally and subconsciously.

But there was a moment early in the series (episode 2) where Robert Kardashian is admonishing his three kids for celebrating the brief fame their father is experiencing by saying, "We are Kardashians. And in this family, being a good person and a loyal friend is more important than being famous. Fame is fleeting. It means nothing without a virtuous heart." These words, said by the one member of the defense team that suffers from both a conscience and a blinding devotion to his long-time friend OJ, marks a definitive moment both for the series and for American culture, as we all know the kids will become famous for the very act of just being famous.

What this series does is not only force us to confront our celebrity-obsessed culture but finds a point in history that shows its birth after several decades of media-based commercialism pregnancy. If we each had the power to travel back in time and watch ourselves make major mistakes, would we? Or more realistically, could we look away?

But what stands out about episode 6, titled "Marcia, Marcia, Marcia," is not what it tells us about ourselves 20 years ago, but what it tells us about ourselves today. By showing what Marcia Clark went through during this trial we, in turn, see what countless women go through on a daily basis. It's more than just eye-opening. As the episode piles on constant body/appearance-shaming, snarky sexist comments, and public humiliations by the defense and two ex-husbands, you don't merely feel sorry for her; if you have any sense of empathy, you feel outraged. 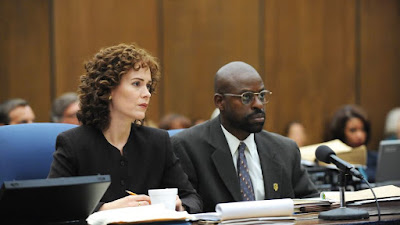 Clark was known as a great prosecutor before this moment, winning the vast majority of cases that went to trial. As the country became fixated on the daily proceedings, thanks to a live TV feed, the papers, tabloids and newly burgeoning cable news industry saw the potential for an unexpected goldmine of ratings. Clark became an easy target for a simple reason few of us want to admit: because she was the only woman in the room.

What we see as the episode unfolds is unacceptable. There's just no other way to put it. Clark is trying to make it in a man's world at the high ranks of the American judicial system, and she's reminded on a near daily basis that she doesn't belong to the "good ole boys club." Even as she's checking out at a grocery store, the cashier picks up a box of tampons and says, "Gonna be a rough week for the defense!"

She has to stop the trial because she doesn't have child-care for the evening. Her ex-husband releases a nude picture of her taken on vacation many years ago. She becomes reactionary to the constant media snipping about her appearance and tries new hairstyles, only to get laughed at walking into the court room. As the daily tabloid headlines mocking her appearance start to pile up, her boss makes a point to tell her how disgusted he is with the headlines as well....but that he knows a few good stylists, too.

What's infuriating is that MEN. DON'T. GO. THROUGH. THIS.

In an episode focused on double standards, the most striking moment is when Johnny Cochran is confronted by the press about domestic abuse allegations in his past. Clark stands to the side, hoping to see him experience some of the same personal embarrassment, only to watch him confidently shut them down for bringing up such impertinent history while a man is on trial for a brutal double murder, and snidely walking away. You don't have to be female to understand the emotion in her face afterwards. (Kudos to Sarah Paulson)

The beauty of this episode is that it quickly and coherently tears through any attempt to dismiss her experience as general weakness and ultra-PC sensitivities. Actress Sarah Paulson, who will most likely be recognized at the end-of-the-year awards ceremonies for this portrayal, explained to Terry Gross how her opinion of Clark changed as she approached the project. "My impressions of her now, after portraying her, are incredibly, vastly different," Paulson says. "I now hold her to be a very competent, complicated, strong, deep-thinking, quick-witted, quick-draw, wonderful creature."

Is it fair to call an hour of historical fictionalized television "art" or even "great art?" Some will argue no. But art is intertwined with humanities in academia for a reason; they both aim to teach us who we are, how we see ourselves, and even, at times, how we fool ourselves. "Marcia, Marcia, Marcia," does just that, and it does it remarkably well.