Few people can get away with describing their music as an “experience.” But then again, few words come close to actually describing the music of Larry Keel. To see Larry Keel perform is to have just that: a unique, singular experience that cannot be duplicated.

On February 26th, Larry Keel will release his 15th self-produced album, aptly titled Experienced. This album is a portrait of an artist coming full circle into his unique style and voice, but this time embracing it with a deeper sense of comfort and wisdom.

Experienced is a guest-filled album, featuring some of the biggest names in bluegrass and Americana on 5 of its 7 tracks, including Sam Bush, Del McCoury, Jason Carter, Peter Rowan, Keller Williams, Mike Guggino of Steep Canyon Rangers, and Anders Beck of Greensky Bluegrass. But the songwriting and playing from Larry, Jenny Keel (bass), and Will Lee (banjo) are so strong that it never feels like a guest album. The guests each give their respective tracks a sense of color, but even with the blazing fiddle of Bush in the album’s opening instrumental “Ripcord,”  there is never a moment where you forget this is Larry’s music.

Even with the aforementioned star-power featured on Experienced, the album MVP is undoubtedly banjoist Will Lee. Larry and Will played in the cutting edge newgrass band McGraw Gap from 1990-1996 and were winners of the prestigious Telluride band competition in 1995. 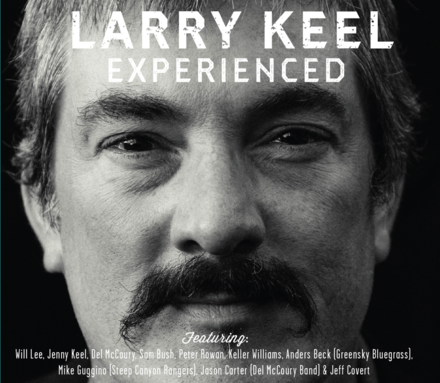 Experienced starts out with the Lee-penned instrumental “Ripcord” that builds a sonic tension throughout the first half of the song and then allows each instrument to release a flurry of hard-driving bluegrass runs that take off with drag-racing intensity. Most artists wouldn’t pick an instrumental to open their album, but most artists don’t have the ability to bring so much joy out of their instruments as Larry Keel, Will Lee, and Sam Bush.

The second track, “Lil Miss,” quickly reminds you who’s in charge, as Larry’s distinctive voice hits you like a California mudslide. This track is vintage Larry Keel as the trio uses harmonies, punchy rhythms, and solos that alternate between laid back and chaotic.

There are two defining tracks for this project. The first is “Miles and Miles,” which features Larry’s soul-brother Keller Williams. The song was the title track of Larry’s 1997 release, but it takes on deeper meaning today. I mentioned to Keel that the song feels like a younger version of himself wrote a letter to the man he is today. “It does feel like that,” says Larry. “The song is the story of a traveler’s life, and knowing how much Keller Williams and I have traveled in the 20-plus years we have known each other, it seemed only fitting. Full circle, I reckon!”

The second defining song is “The Warrior,” which is written from the viewpoint of a Native American warrior and perfectly features the haunting, legendary howls of Peter Rowan. The Warrior is a seeker of truth and knowledge, a man that isn’t afraid to walk this world in search for something greater and more meaningful than himself. It is easy to see Larry Keel as this warrior, as he has spent his career following the spirit of his own unique sound.

“Fill ‘Em Up Again” is fun bluegrass romp by Will Lee that features Del McCoury, Jason Carter, and Mike Guggino that reminds us that this band comes from the world of bluegrass music and can play it as well as anybody out there.

Larry is a unique artist in that he never settled as just being a guitar wizard, as so many young virtuosos do, but instead, he created his musical identity through his own personal vision. Many artists are capable of one or the other, but few accomplish both. Experienced is not just a celebration of this accomplishment but also a retrospective embrace of it. We hear many original and unique voices in this industry, but rarely do we encounter one so incredibly genuine.

In “Miles and Miles,” Larry sings, “My truthful heart will light the darkened path.”

It would be hard to find anyone singing a line more honest than that.