The Year of the Podcast: Why Serial is the Elvis of Podcasts.

It does seem that the term has been around for a very long time (actually it's just 10 years old), but this year was the first time we've seen a "podcast" grow out of the niche techie world into the mass media zeitgeist.  The moment that the bugle call announcer of all things popular, Rolling Stone, gave the freshman podcast Serial a full, color page in its magazine, I knew these little intellectual nuggets would no longer exist solely within their underground aural strata.

For the last decade, podcasts have existed for their own niche markets, each catering to a specific, and often specialized crowd. Cooking, religion, fitness, sports--you could make a podcast on anything, do it inexpensively, and if you produced good content you could gather several thousand faithful listeners.

While some shows grew to over a million listeners, such as the always compelling NPR based "This American Life," there was no single podcast that connected huge swaths of the country together in a shared experience until Serial. Serial is the Elvis Presley of podcasting.

Serial reopens the case of the murder of a 17 year old girl in Baltimore Co in 1999, for which her ex-boyfriend is serving a life sentence for and has always maintained his innocence. The podcast is released weekly.

Whereas most shows are produced for specific target markets, this one connects everyone with a real story, told in real-time discovery, by an impassioned Sarah Koenig. But most impressively, it has developed an audience of listeners who have never listened to a podcast before. This American Life took 4 years to reach a million listeners; Serial did it in 6 episodes. High school teachers across the country are adjusting lesson plans to include Serial, in one case even replacing Shakespeare's "Hamlet." (English snobs may be revolted by this idea, but imagine the teacher's happiness with just finding something teenagers will actually engage with. It's hard to blame them.) 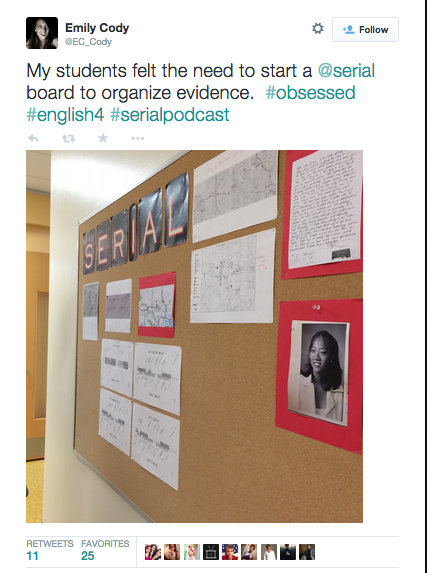 According to an article in the Wall Street Journal, Serial is the fastest podcast to reach 5 million downloads in iTunes history, and is the top podcast in the U.S., Canada, the U.K., and Australia, and in the top 10 in Germany, South Africa, and India.

Serial is serious, addictive, sobering, revelatory, and keeps you guessing throughout. It's a classic whodunit crime drama that unfolds with every answer leading to another question, which Koenig and her crew exhaustively and honestly chase down. But most importantly, it's a true story, and I think that's where a lot of the magic of podcasts lies. There is something both refreshing and captivating about combining the idea of the turn of the century old time radio shows with true, American stories, that can and do happen in our hometowns. There's a power in just hearing a voice tell a great story and comparisons to the golden age of radio are justified.

The reason I love particular podcasts so much is they are both a bastion of independent journalism and an efficient communication tool for smart, passionate people. Sending your voice to millions of listeners has never been this easy and cheap, so there is an inherent freedom for journalists to dig deep into stories without the over-the-top commercial pressures of other mediums. These people are driven by their passion and insatiable curiosity, which is more than worth the once a year fundraising or minute long sponsor recognition at the end of the shows. Cheap does not mean free.

If Serial opens the door to millions of people harkening the golden age of radio, then here are a few "must listen" podcasts.  (If you're confused on how podcasts work, here's a how-to link.)

While many of the most popular podcasts are NPR shows that serve both mediums, there is one pure podcast that also has an impressive buzz around it: Dan Carlin's Hardcore History

Carlin's fresh take on history and masterful storytelling rise above almost everything in the podcast world. The stories are anywhere between 2 and 15 hours long, which seems daunting at first, but once you're into them it feels more like binge-watching your favorite TV show than a history lesson. Again, it's the passion that drives the success of the show, which was recently recognized as the best classic podcast on iTunes. Load one on your device before leaving on a long drive and the hours will fly by as he explains how the red scares of the U.S. in 1920 and the 1950's are descendent of the French Revolution, or using the ideas of Planet of the Apes and biker gangs to describe the beginning of the so-called "Dark Ages." I've only listened to 2 shows, but I'm hooked.

My two other favorites are the aforementioned This American Life and Radio Lab. Similarly using the format of taking an idea and digging deep to see where it takes them, both are also driven by the unique and sincere personalities of the hosts. Each episode is about an hour long and each show is a compact nugget of intellectual curiosity that can range from funny, intriguing, amazing, and compelling. You never know what you'll get, and be warned, especially in This American Life, the show that doesn't sound interesting in the description can be unexpectedly heart-wrenching.

We have the ability to surround ourselves with music on a near-constant basis, which is both nice and exhausting. Personally, I've started making long drives with these great stories, and the hours fly by for me. If you've never tried a podcast, just go into iTunes and explore the options. Let me know if you find one that you love.