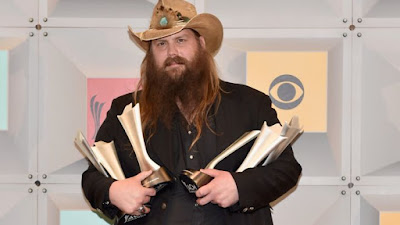 Chris Stapleton won four Academy of Country Music awards last night for his debut album Traveller; Album of the Year, New Male Vocalist, Male Vocalist, and Song of the Year for "Nobody to Blame." His domination of the night prompted the band Little Big Town to thank him for not being nominated for Vocal Group of the Year.

Along with two Grammys for Best Country Solo Performance and Best Country Album, Stapleton, is having a pretty fantastic year.
"Nobody to Blame"

Stapleton's soulful voice and genuine songwriting are being welcomed by fans throughout the world and are a welcome antidote to the cookie-cutter, over-processed, regurgitation of today's pop country.
I got to chat with Stapleton soon after he released his album Traveller last year. He was aware the album was getting great reviews, but no one had any idea that it would sweep through the country music industry awards the way it has.

Brian Swenk: I’m curious about your bluegrass history. A lot of us think that The Steeldrivers’ debut album is arguably one of the best bluegrass albums released within a couple of decades. My band covers a Steeldrivers song regularly, and we play the album on set breaks of our shows.

Chris Stapleton: Well, thank you so much for saying that. One of the best things you can do as a musician is create something that people care about, something that has staying power. A friend sent me a cell-phone video the other day of a band playing on the streets in Seattle. They were covering one of our songs, and I just thought that was so amazing, that we’ve had that much effect on people.

BS: Did you know that you would transition out of bluegrass?

CS: Well, I was a professional songwriter before I was in bluegrass. But I was always kind of a visitor, and I’m the worst bluegrass guitar player of all time (laughs). I love the music so much, and I love the subject matter and the songs — all those things. The Steeldrivers were born out of songwriting. We had all these great songs going to waste, and we decided to just start playing them. We had to figure out how to play some of them in bluegrass, since they weren’t written in that style. It seemed like the right thing to do at the time, but you just have to listen to your gut and make the right choices.

BS: When you write a song, do you have different techniques for the different music styles, or is it all the same for you?

CS: I get asked this question some, and I have to think about it a lot. For me, the process of writing a song is no different for what type of music it is for. You write a song from the best idea you have that day, whether that is pop or rock or bluegrass or folk. They’re all just songs, and they are all just blues-derived art forms. I keep that in mind, and I just try to write the best song I can on any given day. The difference of a song being blues or country or bluegrass is just the instrumentation, so I don’t try and approach it in any different way — I just try to write the song.

BS: “Traveller” just debuted at No. 2 on the country album charts. And as far as I can tell, you didn’t have any help with radio, right?

CS: That’s right. We do have a single on the radio now, but it hasn’t even cracked the top 50. But all that was kind of intentional. I asked the label if I could just put a record into the world and let us go play, and let’s see what we can build off it; and that’s how we’ve been approaching this.

BS: There are a lot of critics who are laying heavy praise on this new trend of underground country becoming popular, with people like yourself, Sturgill Simpson and Jason Isbell. Do you think country radio will catch on and start playing more of it?

CS: I’m not a fortune teller, but there’s certainly places for all types of country music. Country music radio has always been a (songwriting) home base for me, and it’s allowed me to do all these other things and play all this other type of music — even what I’m doing now. I’d certainly love it if they’d embrace me. Regardless, I’m going to keep playing shows and writing songs like I always have.

BS: I’ve noticed that I can play Luke Bryan’s version of your song, “Drink a Beer,” and there are a lot of people that won’t like it; but if I pull up a video of you singing it, they have a different reaction. Same song, but different voices and different reactions. It’s interesting how people can react differently to the exact same song.

CS: Well, there are people who like Luke singing it but don’t want to hear me sing. But as long as people are listening to music of some kind, then we’re all happy — we’re all in it together. As long as someone is selling tickets and figuring out how to make money with live shows, that pays for other people to take risks and take chances. And it identifies a need for live music out in the world. As long as people are still going out to experience live music, then I’m good.


A solo performance of "Sometimes I Cry"