Expanding the Universe with Bluegrass Music

Bluegrass music has a way of finding the deepest pockets of your heart and soul, and then fill them up with a certain sense of lightness that can only come from the bounce of the banjo, the high-lonesome fiddle, and 4-part family harmonies so powerful they seem to expand the universe by themselves.   Diving head-first into this music is one of the most life-changing endeavors a person can experience.  And to do it properly you must follow the timeless Yoda Wisdom: 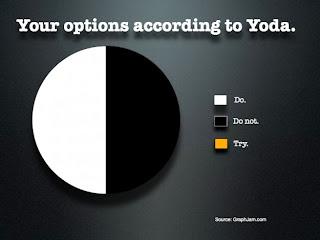 Of the first generation Bluegrassers, there are only two still alive, and they are both banjo players: Ralph Stanley and Earl Scruggs.   I believe we are a special hard-headed breed, so leave it to a banjo player to start one of the hottest debates that bluegrass music has seen in years.   Chris Pandolfi, the banjo player for the top-notch band "The Infamous Stringdusters," started the discussion/debate by posting his Bluegrass Manifesto on his blog.   It's a beautifully written piece that describes the marketing conundrum that the "Dusters" found themselves in after several years of hard work and well-deserved growth.   The gist of it revolves around the question, "Do we continue to call ourselves bluegrass?" He then describes the thought process that forced them to decide that to continue and reach the growth they desire, they had to stop labeling themselves "bluegrass" to take part in the acoustic music revolution that is seeing acts such as The Avett Brothers, Mumford and Sons, Railroad Earth, Leftover Salmon, and Yonder Mountain String Band reach new heights for string-band based music.

As his post took off through the bluegrass community with the same intensity as Chubby Wise's fiddle on Orange Blossom Special, it naturally forced the question of "What is bluegrass music?"  More importantly the post also raised the tangible question, "Should the bluegrass community open itself to these acoustic bands that have obvious bluegrass roots, but yet aren't 100% Bluegrass?"  And here is where the division starts.  You have the big-tent progressives that want to include these bands, recognizing the windfall of new fans that could possibly push the genre out of its current stagflation; and the conservative side that thinks these bands don't deserve the recognition because they are not 100% Bluegrass, and that fans who aren't "true fans of bluegrass" will only water-down one of the most beautiful American legacies that is still alive and well (nevermind the current stagflation in the industry that counts things such as tickets sold and $ earned).  See, you have to understand that bluegrass hit its peak in what we call the "O Brother Where Art Thou" period,  where both semi-professional and professional bands were raking in the money, and has since fallen back to its natural state of a tightly controlled niche market where even the most talented players struggle to make a living.  So the big green and purple elephant in the room of this discussion, that happens to be playing the wash-tub bass,  is that it's really about money.  Of course, that fact is a little too blunt for the keepers of such a beautiful art-form that has remained impressively true to its 1946 roots of the Monroe/Scruggs/Flatt/Wise/Watts super-group that started the genre.  The performers who want to make a living know that we need the influx of these big-tent fans that are both passionate and willing to buy CDs and tickets, while the flame-keepers who typically work other careers and participate in Bluegrass for the sheer love and passion of it do not want to see the music morphed into something unrecognizable.  You can see why it is a hot topic, as both sides have very valid arguments.

What sets this music apart from everything else is the sense of ownership that the fans claim - rightfully, I might add - over it.   Most types of music have a distinct line between the fans and the musicians, but not bluegrass.   For a lot of fans the next logical step is to become a participant, and as this art is passed through the generations aurally, the only boundary for admission is desire, some practice, and a hint of musical ability which is desired but not always required.  It is interesting that the same can be said for free-style rap.  I've always believed that bluegrass and rap are congruent since they were both born out of an artistic expression of a specific cultural experience.   In fact if you're ever at a boring dinner party just make the statement, "Bluegrass and Rap are the same thing." And things will either get more interesting, or you will be ignored for the rest of the night; you win either way, as I see it.

The last, and most important, piece of this puzzle is the IBMA (International Bluegrass Music Association).   This body is the only association dedicated to the Bluegrass Industry (although others seem to be trying to get going) and unabashedly takes the role of Godfather for the music. The fans are going to enjoy the bands that they love no matter what happens, and the players are going to play their music and try to grow their bands each year, and also look up with respect and awe to Yonder Mountain and The Avetts for the huge audiences they play to all over the country.   The question is will the IBMA accept these bands openly and invite their fans in to discover the genius of Blue Highway, Vincent and Daily, Michael Cleveland, etc.   In my opinion, it should, as bluegrass has managed to survive the jazz of Tony Rice and David Grisman, it survived the mad genius of John Hartford, it survived the absurdity of Nickel Creek, and I'm sure it will also survive The Punch Brothers.

But survival for legacy's sake misses the point.  Bluegrass is an art-form--one of the most beautiful in the world--and as a salubrious art-form, it should always move and grow and evolve.  If it doesn't then it isn't art, because, like the human race, growing is the main purpose.    I believe the reason that this debate hits on such a visceral nerve is because we are dealing with one of the most beautiful, truly American, art-forms that has ever been created.   And it all started, as John Hartford sang, in the heart of the cross-eyed child.

The very fact that people are currently discussing this is all the testament you need to understand how special Bluegrass music is.   It lives not in albums, or memories, or the fingers of our elders, but in people's hearts.   It has roots all over the world and through different cultures, but yet it remains quintessentially American.   There's no difference between the 12-year-old who can burn up a flat-top Martin D-28 or the old farmers who come to the weekly "Crouse House jam-session" every Monday night in Sparta, NC.  This music is stronger than most, and will continue to endure because of its earnest roots and the quality of people that keep the flame burning bright.   I'm honored to be a part of it.

I believe the one point that is most easily overlooked is that musicians will consistently look for different ways to express themselves and these different combinations will always produce different sounds that will not fit in any conventional labeling.  The only reason Bluegrass is called Bluegrass is because that was the band name back in 1946.  It was a brand new voice expressing itself individually and no one knew what else to call it.   Individual skills and personalities that work together can create a brand new combination.   Technically an Earl Scruggs banjo timing should not match up well with a Duane Allman blues timing, yet in our band it somehow does.   We are always asked how we describe our music and we have yet to come up with a perfect answer.  Appalachian Rock is a beautiful term but it does not help someone gain a better understanding of who we are.

As we debate what is and isn't Bluegrass in 2011 we must also remember that one of Bill Monroe's greatest pieces of advice to up-and-coming musicians was, "Learn to play it right, but then go find your own voice."  Jerry Garcia used to always point out that both he and Grisman were Bluegrass/Monroe disciples, and then they created the "Dead" style and "Dawg" style.  While some work furiously to preserve Monroe's voice of 1946, other voices will sprout up and take off.   Bill Monroe would have been 100 years old this year, and there's probably some kid practicing in his bedroom right now that will create a style that will survive the generations, and people will be trying to preserve that voice in 2111.  It is exciting to think about isn't it?

(I've had this piece written for well over a week now and for some reason I just could not post it, and then I found out how sick my good friend Billy Constable is and it all became clear.  This post wasn't complete without the following paragraph - about one of the main people that taught all of us young Boonies what Bluegrass music really is.  Thanks Billy!)

Next week on Wednesday, October 26th we'll be playing a fundraiser in Boone, NC for Billy Constable, who played a huge role in helping all the young Boone NC bluegrass pickers play the music the right way!  Billy has a large tumor on his brain and will be going into surgery soon (with no health insurance).  To know Billy is to love him, and to look up to him as the archetypical Bluegrass picker.  You see, a lot of us didn't catch the bluegrass bug until we got to college.  And as we were all meeting each other and learning how to play this beautiful music, Billy Constable was there showing us the right way to play it.  He would say things like, "Leftover Salmon and String Cheese are good bands but the heart of the music is in people like The Stanley Brothers, Don Reno, The Kentucky Colonels, and Jim and Jesse."   He was always helping us learn new songs, but he also taught us how to really hear the music - like the old-timers.   He taught us where to find the spirit of the music.   And for that we will forever be indebted to him.  You can find updates and donate money at http://www.billyconstable.com


The next generation of Bluegrassers proving that the music is in good hands!