Think Different. We are the 99%

“Your work is going to fill a large part of your life, and the only way to be truly satisfied is to do what you believe is great work. And the only way to do great work is to love what you do. If you haven’t found it yet, keep looking. Don’t settle. As with all matters of the heart, you’ll know when you find it. And, like any great relationship, it just gets better and better as the years roll on. So keep looking until you find it. Don’t settle.” - Steve Jobs

As I sit here this morning finishing up this piece, I have a weary heart for the passing of Steve Jobs at such a young age, 56 yrs old.  A true innovator and artist, in every sense of the word, who changed the world.  If the meaning of life is to make the world a better place then Mr. Jobs did his part.  I want to do my part, and I want everyone else to make an effort to do their part.  We are all in this together.    Here's our chance.

That is the key to it all.   That statement will either make or break this beautiful American uprising that is now in its 20th day, and has just started to receive mainstream reporting.

Look, I know a lot of you don't like politics and don't like to hear or read about what is going on.  It seems like it's a broken system and there's nothing we can do about it.  If this is the case then I ask you to stay with me, for one simple reason: we are the 99%.    If we put our energies into the right places, and most importantly not let them divide us back to 49% vs 49%, then we could actually see a fundamental change in the political landscape.   Forget conservative/liberal, forget republican/democrat, forget all of it.  Let's put aside, even for a brief moment in time, the circular arguments that never get us anywhere.   If we all can assume the mindset that we are the 99%, then beautiful things can happen, and it should, I believe, produce a constitutional amendment that removes all political donations, and ends the wild-west auction house that American democracy has become.

This is from a statement from the protesters in NY.

"The one thing we all have in common is that We Are The 99% that will no longer tolerate the greed and corruption of the 1%." 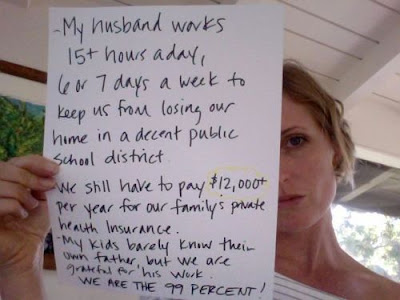 I was first introduced to this idea by the excellent book "Griftopia" by Matt Taibbi.   I wish I had the exact statement (I've loaned the book out and have no idea who has it now), but it was along the lines of "If the two parties were properly aligned then it would be the 99% of the populist against the 1% of the ruling elite, and the 99% would storm the gates of both Wall St and Washington for the blatant crimes they've committed in destroying the world economy."  Taibbi was pivotal in investigating the cause of the financial meltdown that has brought the entire world to its knees.   It all started with this piece explaining how investment banks, and especially Goldman Sachs, are able to engineer and make huge profits off of the bubbles that nearly kill the economy.  It opened with the iconic line  "The first thing you need to know about Goldman Sachs is that it's everywhere. The world's most powerful investment bank is a great vampire squid wrapped around the face of humanity, relentlessly jamming its blood funnel into anything that smells like money."  This is the ruling elite.  The small handful of investment banks that dictate American political policy in their favor while the rest of the country and world suffers.   And this is why people are camping out in front of Wall St. 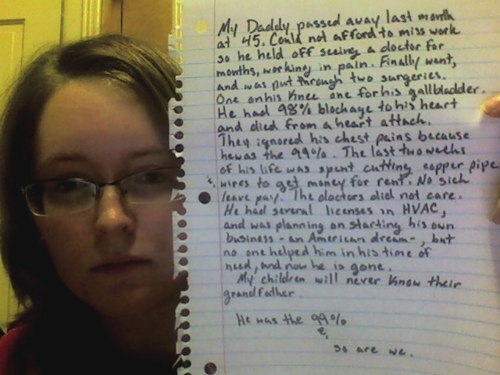 I believe the most important point that we have to be cognizant of is the ruling 1% will produce a backlash soon. They will use their money and influence to paint this uprising as a liberal hippie-infested nuisance that any respectable conservative will openly mock and condemn, or as I said earlier, divide us back into 49% vs 49%.   If this happens, and it is already starting, then it will be business as usual for the robber barons of the 21st century.   This is what we cannot let happen, until their is a constitutional amendment that stops the corporate money from buying politicians.

The best option we have as the 99 percenters is the "Get the Money Out" campaign by Dylan Ratigan, who I've became a big fan of lately.  Ratigan has started the campaign to force politicians to create a constitutional amendment that will take money out of politics and will not allow corporations to own politicians.  90% of political problems can be solved by this amendment.    It does not matter what label you attach to yourself, who you vote for, or what you believe, every single one of us can agree that this would be a positive step forward for this country.   Click on the link and sign the petition. 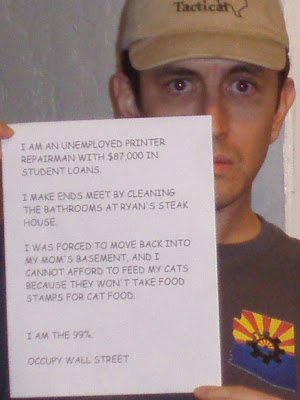 Question: What percentage of politicians who raised more money than their opponent won their respective elections?   60%? 75%?    No, in the 2008 elections, 94% of politicians who raised more money won their elections.   It is estimated that every politician spends half his day, every day, solely raising money for upcoming elections.  Imagine if we can put a stop to that?  We all know that Obama raised a lot more money than McCain, and we also know that he broke the record for small donations from ordinary people like us.   But did you know that the majority of the money he raised came from the financial institutions (the ruling elite), and that the majority of that money was from Goldman Sachs?  Of course there hasn't been any meaningful Wall St regulations put back into place since his election.  They own him, just like every other politician out there.

I know these details can seem boring to some but hang with me here.  Financial de-regulation started in 1999 with the repeal of the Glass-Steagall act of 1933, which was put into place after the Great Depression to stop the boom/bust cycles of the economy--and it worked!  In fact it worked fantastically, until it was repealed under Bill Clinton.   Now the Wall St banks can over-leverage to the brink of destruction and they all know that the U.S. Government will bail them out with tax-payer money.   These bail-outs will no longer be guaranteed if the banks are not allowed to buy the politicians that will ultimately provide these bail-outs.   The last thing worth pointing out is that a few years ago, in a huge "WTF moment," the Supreme Court ruled that corporations can now spend unlimited amounts on campaigns.   The flood gates have opened. 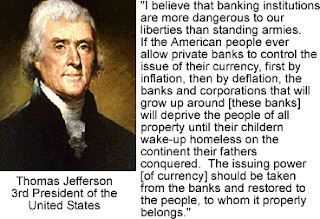 Here’s to the crazy ones. The misfits. The rebels. The troublemakers. The round pegs in the square holes. The ones who see things differently. They’re not fond of rules. And they have no respect for the status quo. You can quote them, disagree with them, glorify or vilify them. About the only thing you can’t do is ignore them. Because they change things. They push the human race forward. And while some may see them as the crazy ones, we see genius. Because the people who are crazy enough to think they can change the world, are the ones who do. - Steve Jobs